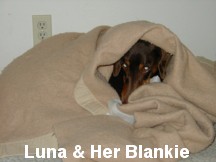 Luna is a female red doberman adopted from the Animal Humane Association of New Mexico when she was about 6 months old. We saw her photo on a bulletin board at a restaurant back in September of 1993. She was being featured as "most adoptable dog" of the week. We needed a companion for Poppy, our older dobergirl who had lost her doberboy to a bowel blockage, so we went down and found that Luna was still available. There she was - with ears and tail all whole, and all legs, and skin and bones. No, we did not name her (sounds like a dyke dog name) - she came with the moniker. 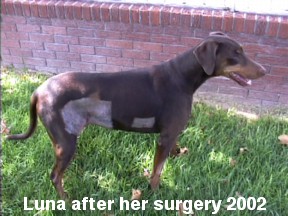 Luna may have enlivened or driven Poppy to the grave, we are not certain which, but Poppy died quietly in her sleep a little over a year later, at the ripe old dobe age of 13. Luna is about 65 lbs. and is the dominant dog of the house (especially humbling 100 lb. Palmer). She has passed the AKC's canine good citizen test and has done basic obedience. Luna keeps all the toys and bones, and is very regal and deer-like in her bearing.

Luna's health update:
In the summer of 2002, Luna had surgery to remove various lipomas (fatty tumors). She has healed up nicely from that ordeal. Dobermans are prone to lipomas as well as hypothyroidism (low thyroid hormone) - both of which Luna has. She also has some bladder incontinence which is well controlled (THANKFULLY!) with the medication PPA (Phenylpropanolamine). 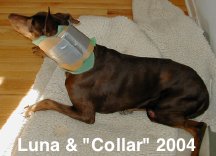 Unfortunately, one result of the surgery was a lick granuloma - a skin polyp on her hind leg was removed that shouldn't have been (only lipomas were supposed to be removed) and Luna has teased it into a full-blown sore. We put her into a foam/cardboard/duct tape collar when it gets really bad. An elizabethan collar to keep her from reaching the wound won't do, because she wouldn't be mobile enough to get in and out of the dog door at her will. Nor would bandaging her leg, for the same reason.

In the fall of 2003 Luna started showing signs of weakness in her limbs, most notably in her hind quarters. We started her on a Glucosamine/Chondroitin compound and the vet prescribed a pain reliever. 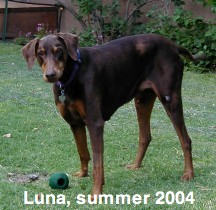 In February of 2004 it continues to be progressively hard for her to get her hind legs under her to rise, but once she is up, she prances around like a pup (though a little stiffly). We stopped the Glucosamine/Chondroitin and started to give her 81mg of buffered aspirin twice a day and make sure she gets enough exercise. We are looking into what more we can do for Luna to make her elder years more comfortable.

Early 2005 update:
Luna has been doing well: getting enough exercise while enjoying a new companion, Riley. We were able to heal her lick granuloma this winter!!! We ended up using a standard e-collar on her for about 4 weeks. Now that the skin is healed, it holds no stimulation for her when/if she licks. We started giving her the Glucosamine/Chondroitin again instead of the aspirin.

In May of 2004, Luna was diagnosed with a hemangiopericytomic tumor on the rear of her pelvis. It was inoperable: not having the needed one inch clean margin, so we voted to let the disease take its course. Its course, happily, was to disintegrate so much as to become unpalpatable, and we rejoiced. Luna's hindquarters are stable though still weak. She loves her walkies! 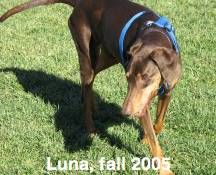 Fall 2005 update:
Luna was diagnosed with lymphoma in July this year. We are sad but she does not know the extent of her illness. She continues to have her same personality and joy of life. In August we opted for the least invasive thing to do: doses of the steroid, prednisone, every day. The effect was not immediate, but Luna was stable and her neck lymph nodes did shrink after a while.

In early October, Luna's neck lymph nodes swelled dramatically, causing edema. Kris and Turtle-Bear were due to leave town for a week and Luna would quickly have died while we were away. We agonized about whether to put her down at the time, but really wanted to have more time with her and give her a proper goodbye when her time comes. So we and our vet opted for one dose of the cancer chemotherapy drug ElSpar (Asparaginase). The effect was quite dramatic!!! The swelling went down in 12 hours as the lymph nodes shrunk back. Between early October and another (less dramatic) reoccurrence of the lymphoma four weeks later, Luna gained weight and had a great time!

The lymph nodes in Luna's neck started swelling again on November 2. The swelling was less than previous and only on one side so far. Now we were waiting for Luna's next move. She was slowly losing weight and retreating more to her bed. But then again - she still loved her walkies! She still initiated play and was aware of her people and surroundings (though she was quite deaf now - we noticed her hearing loss in the spring). [12/3/2005]

On December 6, 2005 Luna stopped eating and was drinking very little. (She had a good weekend prior to this: long walkies at dog park, visiting with doggie friends.) By afternoon of this day, we felt that she was failing. We called Jack (our house sitter and Luna's "Uncle" Jack who calls her "Princess") to come over and spend time with her. He stayed all afternoon. Luna did get up to drink water outside while Jack and Turtle-Bear watched. She refused broth.

Luna started losing her sense of her surroundings late in the evening, though we were still able to get her on her feet and move her about with a towel around her waist. She refused water and did not know what to do when taken outside. She was staring quite blankly at this time.

By late evening we made her comfortable in her bed and we stayed with her on the floor. She was breathing heavily all day, but the breathing was getting particularly labored. She was not visibly aware of us there (and since she had little or no hearing left, she probably did not hear us), but we stroked her and encouraged her to let go… and then she did…

Luna died at 1:10 AM, Wednesday, December 7, 2005 with Kris, Turtle-Bear and Riley by her side. Arrangements have been made with Best Friends Crematorium.