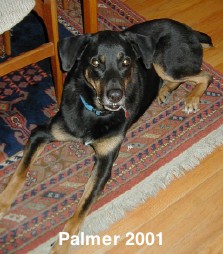 When Poppy died in 1994 all our friends thought we had a "vacancy" at our house. Luna had turned into a regular destructo-dog, so we thought getting a puppy or companion dog for her would be a good idea. We were told about a "doberman" puppy that was placed at a local "pet resort" by a member of the New Mexico Animal Friends. We took Luna down to see Palmer (as he was named) and it was love at first sight for her! No, he wasn't a dobe, but Luna had spoken; she wanted this 5 month old pup that was already her size. 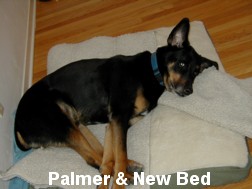 Palmer was named after the location at which he was found: the Palms Trading Post near Old Town Albuquerque. Our vet figured he was a shepherd/rottweiler mix. He had turned into a beautiful and loving dog with a baritone voice and a love of frisbees and bouncy toys.

Palmer's Health:
Palmer had some joint problems since his youth, though appeared very healthy in every other way. We'd given him a Glucosamine/Chondroitin compound for several years and kept his weight below 100 pounds (45.35kg). This appeared to work very well for him.

Palmer gave us a scare when he had a couple of seizures (Oct. 2002 and Feb. 2003). He had not had any since then, that we know of. The vet could not find a reason for the seizures. 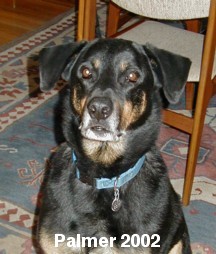 In February of 2004, Palmer suddenly stopped eating and started to vomit (eventually became dry heaves, because he didn't have anything else to throw up). After x-rays to rule out an intestinal blockage and a blood test that had only slightly elevated liver enzymes, we started him on several days of bland food: white rice and chicken with most of its fat removed. Meals were very small and frequent at first. It took a few days, but then he started having a fairly good appetite, though he was not back to his usual "eat in 20 seconds" style.

Three weeks later, Palmer took a turn for the worse. He refused his food and began to vomit. This was over a weekend, so we took him to the Albuquerque Emergency Animal Clinic. He was due for an ultrasound at our vet at Aztec Animal Clinic the following Tuesday, and he had to make it through the weekend somehow.

Palmer's liver enzymes were very high and glucose low. He needed to be on an IV for fluids and medication, so could not come home. We shuttled him to our vet's during the following Monday morning, because the Emergency Clinic is only open 5pm to 8am.

Our emotions were going up and down with every update of Palmer's condition. We were prepared to say goodbye to him late Monday evening at the Emergency Clinic, because the vet told us of his extreme lethargy and lack of responsiveness. When we arrived, Palmer wagged his stumpy tail when he saw us, and when our friend Jack ("Uncle" Jack to Palmer) arrived minutes later, Palmer rose to his feet with joy, giving everyone an emotional boost. But his condition was still quite critical. A chest x-ray and a blood clotting diagnostic were done later in the night. We found out that the x-ray was clear (no metastases) before we went home. In the early hours of Tuesday morning, we got a call that the blood test showed he had clotting problems due to liver dysfunction. He was started on plasma to help his condition.

At 5:30, Tuesday morning, we got a call from the Emergency Clinic saying Palmer was having continuous small seizures, due to a condition called hepatic encephalopathy. We called Jack and we rushed to the clinic. Palmer was doing quite badly; he didn't seem to know we were there. In essence, he was gone already - at the point of no return. The vet gave Palmer Valium through his IV to relax his muscles and we spent some time with him saying goodbye. He laid there, breathing with effort. When we were ready, the vet gave him another shot, and his heart stopped. Palmer, our big goofy boy, was gone. 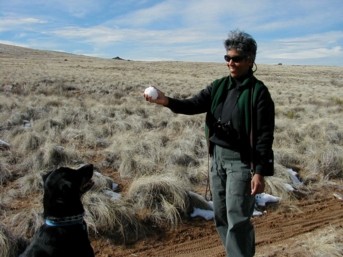 Palmer gets ready to catch a snowball.